I was born in Hamilton – but I’ve never lived there! I grew up around the North Island – Matamata, Rotorua, Palmerston North, and Tauranga, and I tend to say I’m ‘from’ Tauranga.  I left home (and the country) aged 17 to live and study in Ōsaka, Japan, and since then spent time moving between Tauranga, Palmerston North, back to Japan, to Auckland, to Dunedin and ultimately back to Auckland in 2010. It’s fair to say I’ve moved a LOT in my time on the planet; I think the average number of homes someone lives in in their lifetime is 11, and I’d pretty much tripled that by age 35. Because two of those moves were to live  in Japan – one aged 17 to study, and one at 21 to work in a school – I speak Japanese, and was actually a Japanese teacher pre-EP.  I’m terribly allergic to seafood, which made Japan a challenge, but I love the place; I think of Tauranga as my home town, but Ōsaka as my ‘soul home’.

Why do you love working at EP? 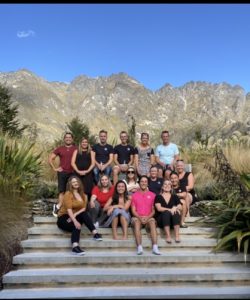 My EP journey started way back in about 2008, teaching at Bayfield High School in Dunedin in the very early stages of EP development. In 2012 I brought it in at my new school, Mission Heights Junior College in Auckland, and then in 2015 I was offered the job at EP and made the move. My history with EP means that I’ve just about seen it all, from the very early days, through staff and office changes, and everything else that comes with growing an EdTech business.

EP is such a great fit for me – I love the ‘thinking on your feet’ nature of my job, and the fact that two days are rarely the same.  It’s fast-paced, constantly evolving and dynamic, but the core of the mission has always been the same – we provide high quality teaching and learning support that enhances education, and there’s not a single part of that sentence I’m not proud about being part of every single day.

During the COVID-19 lockdowns this has been especially true.  I’ve worked some really intense, long days, but ultimately I get to come to work every day knowing that my work positively impacts someone else, and that is absolute gold.

How did you find transitioning from your previous role into and EdTech role? 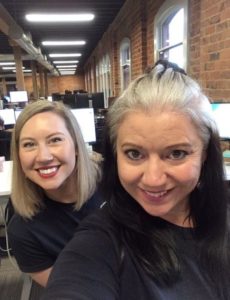 Some aspects of EP mimic the classroom – running PD and teaching classes draw from the same skill set, and you have to be able to engage and empower your audience to learn what you’re showing them. Some are wildly different. One thing I found especially challenging was that – after 11 years in the classroom – I blocked time out of habit.  I’d do things in one hour sprints, much like teaching classes, and would find it strange when things didn’t take an hour.  I had to relearn how to fill and allocate time.

People always ask if I miss the teacher ‘holidays’ – such a strange word to use for the recovery and prep time teachers have between terms, but we’ll go with it.  I do and I don’t – it was nice to have those guaranteed sleep-ins and the break over the summer, but I find that I’m often quite energised by what I do now, especially when it involves travelling our beautiful country.  Plus no reports, no lesson planning and no extra-curricular responsibilities, so it all balances out nicely!

I also found it hard to delegate – as a niche elective teacher I was used to having to run a programme, and being the only staff member who even spoke the language in question, let alone had familiarity with the curriculum.  Learning that there was a team of people I could trust to be amazingly supportive and helpful, bizarrely, took time.

What do you enjoy most about your role?

Definitely a tie between travel and professional development! Getting to explore Aotearoa for work is an absolute privilege, and I make a point of seeing something wherever I go, whether that’s a walk down Caroline Bay when I’m in Timaru, or popping to the garden on a lunch break in Hamilton. My preferred exercise is walking, and so it’s awesome to be able to exercise while seeing so much of this incredible country!

With professional development, it’s awesome to be the person who is there to support our teachers. They put so much into their students, and to say “I’m here for you, for your own learning and to support you” – and mean it – is a joy. Getting feedback from teachers that a session really worked for them is the greatest accolade as well – it’s easy to stay passionate and inspired when you’re getting that feedback that what you’re doing is valued. I’ve been to Japan 9 or 10 times and I’ve seen a lot, but there are still corners of it I’m desperate to explore. Top of that list are Sapporo and Hiroshima. I’d also love to head to Europe one day, and I was working my way through the islands before the pandemic; I’d been to Samoa, Fiji and Vanuatu, with Hawaii thrown in there as well. I’m not at all done with that side of things – Rarotonga, but also back to parts of places I’ve already been to. In Samoa, for example, I spent my whole week on Upolu, so I’d love to get to Sava’i. I’m a traveller at heart, and that’s been one of the hardest things about the pandemic for me – not getting to drop everything and explore somewhere interesting for a week or two at a time.

Tell us about your pet(s)!

I actually can’t keep pets at the moment (all the travelling isn’t fair on a pet!) but my neighbour’s cat thinks he lives at my house so it kind of works out. His name is Rafie and he’s a beautiful Russian Blue (I think) cat who has a major attitude. He will grizzle if I don’t let him in, and then check every room in my house, and then insist on being let out – but won’t have a bar of cuddles or being picked up. It’s his way or you’ll hear about it, and it’s fairly amusing. He’s been known to climb into my suitcase when I’m packing for a trip as if to inspect my preparations, and quite likes to hang out on the deck in the way then race off if I try to work around him. I live in fear that I’ll accidentally lock him in my apartment then head out of town for a week – but that’s yet to happen.

What advice would you pass on to a younger version of yourself?

Don’t overthink it, just do it. You’ll be amazed at what is possible when you’re not standing in your own way. 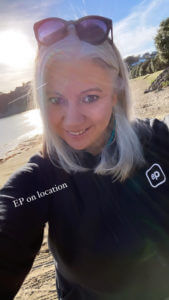